Some 30 activists took part in the "Rainbow Rally" in support of the rights of children and teenagers. The rally had been authorised by the Moscow city authorities to be held in Moscow's 'Hyde Park'. Before the event, the activists were attacked by a group of religious "fundamentalists" at their assembly spot, pelted with rotten eggs and sprayed with pepper gas.

Nikolay Kavkazskiy, a Russian human rights activist known for having spent a year in prison on charges of participation in the alleged "mass riots" on Bolotnaya square suffered bruises, burns, a dislocated ankle and had pepper sprayed into his eyes. He had to be helped by paramedics and was unable to take part in the rally as planned.

The LGBT activists managed to fend off the attack and make the attackers flee for the time being.

Igor Yasin being arrested by the police after the rally. Behind his right shoulder is one of the most aggressive Orthodox fundamentalists who attends every LGBT event to attack the participants.

Several days before the rally, the organizers issued a statement saying:

Recently, under the pretext of protecting children and preserving “traditional values​​” the Russian authorities have adopted several laws restricting the rights of minors. Antisocial and authoritarian politicies taking root in Russia lead to the aggravation of the problems of domestic violence, bullying in schools, adolescent suicide, a lowering level of education.

The authorities believe that a teen is something like a blank sheet of paper on which you can “write” anything. School and the educational system become more focused not on shaping free, critically thinking individuals, but loyal masses which are easy to manipulate.

In Russia there is a catastrophic situation with domestic violence. About 40% of all serious violent crimes are committed within family, each year about 2,000 teenagers commit suicide. Many of them are homosexuals and transgender people facing misunderstanding of people around them. The authorities deny LGBT teens any support  and hope for the future.

Adoption of the law on the scandalous propaganda of “non-traditional sexual relationships” created a favorable environment for the growth of violence and harassment of LGBT teens and other “queers”, restricted the right of adolescents to obtain reliable information and expert assistance.

Game on prejudice and hate speech does not require much cost, but the effects will not be rosy for most.

Instead of prohibitions, restrictions and prejudices children and adolescents need good education and, specifically, sex education. An effective social policy for the prevention and protection from domestic violence and harassment in schools is necessary, as are accessible crisis centers to help the victims of violence.

At the rally itself the activists held posters with slogans which read: “No to obscurantism, give Sex Ed,” “Children need schools and kindergartens, not homophobic laws,” “70% of foster children returned to orphanage,” “Knowledge instead of hate propaganda”, etc. Several dozen homophobes tried to disrupt the event by throwing eggs and glass bottles filled with paint from a bridge nearby and shouting out homophobic slogans. They chanted: "Fags should be burnt in concentration camps", "God approves of concentration camps for fags" and promised to rip our stomachs open.

That alongside streams of foul language and sexual insults.

The police ignored them, but detained four activists instead: Dina Kosenko, Alexander Leonov, Nix Nemeni and Rayda Lynn, despite the fact that the rally had been authorised. According to “OVD-Info”, Lynn and Nemeni were beaten after their arrest. According to Grani.ru, one of the detainees was released from the paddy wagon soon. Toward the end of the event activist, frontman and organizer Igor Yasin was detained. In his Twitter Yasin said that he was charged with article 19.3 “Disobeying policeman orders” for allegedly trying to turn the police car upside down. 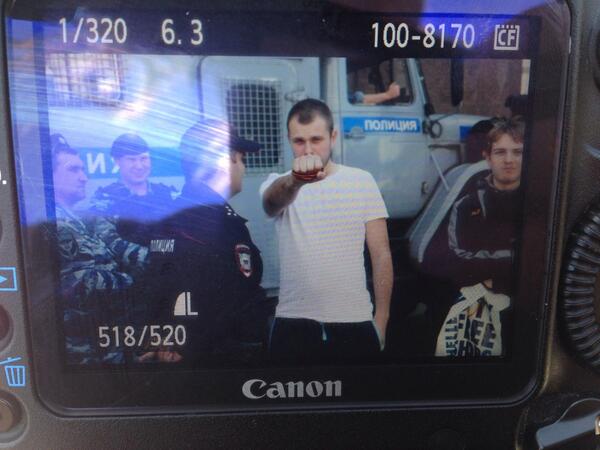